Switch to Accessibility Site
Home / Blog » Your Partner in Health

Your Partner in Health 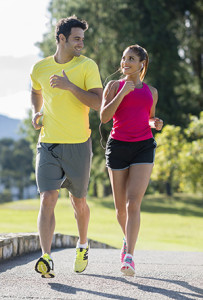 Perhaps you’ve known it all along, but now there is a study to help prove that the best incentive to get in shape could be the one who sits across from you at the dinner table. A recent study suggests that exercising isn’t only good for you, but it’s also good for your partner. Researchers at Tel Aviv University and Johns Hopkins Bloomberg School of Public Health presented findings from their research that show if one spouse begins an exercise regime, the other spouse is more likely to begin exercising as well. “It was well known that spouses exhibit similar risky behaviors like smoking and drinking, but it wasn’t clear how an individual’s level of physical activity was influenced by changes in his or her spouse’s level of physical activity,” said researcher Dr. Silvia Koton. “Our study tells us that spouses can have a positive impact on one another in terms of staying fit and healthy over time.”

If you or your spouse is starting a new exercise regime, it may be best to try as a team. You will have a buddy and a cheerleader alongside you. Often times, having someone to exercise with and hold us accountable for maintaining our exercise routine is key to continuity and how we can reap the most benefits from exercise.

The above article is provided by the staff at Dr. Shillingford’s Miami/Ft. Lauderdale/South Florida area bariatric surgery office. The health and wellness of our lap band, gastric sleeve, and gastric bypass patients is the most important priority, and we enjoy sharing information with our patients to help promote this goal.