Use a Smaller Plate to Help You Lose Weight 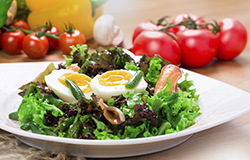 We’ve all probably heard a bunch of tricks people claim helped them lose weight. For a while it was the cabbage diet, avoiding anything white, not eating past 6 pm, and putting your fork down between bites. One such trick that has earned some scientific backing is using a smaller plate. This fairly simple change can help gastric sleeve, gastric bypass, and lap band patients lose weight without deviating from their post bariatric surgery diets.

Researchers looked at the results of 56 different studies that looked at the relationship between smaller plates and consumption. While not all the studies used similar methodologies, two trends emerged from the data:

So, in a situation where food is placed on the table or offered in a buffet and diners used smaller plates to serve themselves, this lead to reduced intake. On average, reducing the plate size by 50% led to a reduction in intake of 30%.

For those patients who are trying to lose weight before their surgery or in a situation where a gastric sleeve, gastric bypass, or lap band patient is having a hard time sticking with their reduced calorie diet, using this simple trick may help them reduce their intake. Choosing a smaller plate to eat your meals may help you reduce your intake.