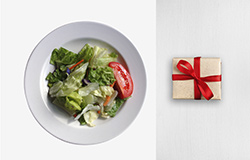 A joint study between University of Arizona and University of Southern California used magnetic resonance imaging (MRI) to look at how the brain responds to choosing a smaller portion with a reward compared to choosing the full portion without a reward. The findings offer insight into why people overeat and how they can be just as happy without overeating.

In regard to the prize offered, it seemed that the thought of getting a reward was just as motivating as actually receiving the reward. Even the chance of getting a reward was motivating enough to choose the half portion option. When the half portion was paired with the chance of getting a lottery ticket, participants still chose that option even though they weren’t guaranteed the lottery ticket. In fact, vague offers of a prize (“you could win” type offers) were more effective than prizes with stated odds (“one in five will win”).
So, what how does this translate in the real world?

Study authors feel that the findings imply that individuals can reward eating less with a non food prize. By reducing their intake and accepting a non food rewards, individuals can impact weight loss. By treating themselves to a non food reward, individuals can eat less and still feel satisfied. Also, as many celebrations seem to hinge around food (job promotions, birthdays, getting good grades, or children demonstrating good behavior), this study suggests that substitute rewards can be just as satisfying as food in these instances. By shifting our reward for achievements away from food, we can help break the link between celebrations and food. This could help prevent overeating. Breaking this cycle can be especially important for people who have had obesity surgery. Often, rewarding achievements with food is ingrained in our minds and behavior. But, gastric sleeve, gastric bypass, and lap band patients often have to shift away from behaviors and mindsets that contributed to their obesity in the first place. Changing their rewards can be a good step in the right direction.
Many children find stickers or small toys rewarding, but what do adults considering rewarding substitutes for food? That depends on the adult. If you are looking to reward yourself for eating less, choose something you like. That could be a buying a lottery ticket, watching a special TV program or movie, buying a new shade of nail polish, painting your nails, buying yourself flowers, having a night out with friends, sleeping in, downloading a new ringtone, or buying a new song or album. Rewards don’t have to cost a lot of money, or any money at all. Be creative. If you are able to eat less and still feel satisfied and rewarded than go for it.

These reward suggestions are offered by Dr. Shillingford, M.D., P.A., a board certified general surgeon who specializes in laparoscopic and obesity surgery. Dr. Shillingford’s practice is located in Boca Raton, Florida. His sleeve gastrectomy, gastric bypass, and adjustable lap band patients often come from all over Florida including Fort Lauderdale, Miami, Miami Beach, Wellington, Tampa, West Palm Beach, and Orlando. In addition to offering bariatric surgery and follow up appointments, Dr. Shillingford encourages his patients to make positive changes in their lives to help them achieve their goals. Eating less often leads to weight loss, and ultimately better health.