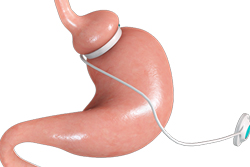 A recent study published in the journal Obesity Surgery has shown significant benefits for severely obese teenagers and, despite its controversial nature, should still be considered as a first option to manage obesity during adolescence. This is in departure with conservative norms which are reasonable: diet, exercise, nutritional support and motivational support.

Led by University of Adelaide researchers, in collaboration with Flinders Medical Centre, and published in the journal, the study is the first to show medium to long-term follow-up (3-5 years) of lap band surgery in Australian adolescents. The research followed 21 severely obese teenagers between 14 and 18 years who had Laparoscopic Adjustable Gastric Banding (lap band surgery) in the South Australian Health Service.

Australian revised National Health and Medical Research Council guidelines for obesity management say that lap band surgery should be considered in adolescents with severe obesity – that is with a body mass index (BMI) over 40 kg/m2 or over 35 kg/m2 (weight/height2) with the presence of obesity-related diseases and who don’t respond to medical treatment.

The doctors involved in the study spoke of the importance of the surgery in light of the significant health and psychological problems teens have with severe obesity. The other highlight the doctors noted is that the Lap Band may be reversible and can be safely used in teens with severe obesity. “Although gastric banding has been controversial and is currently less used in adults with severe obesity, lap band surgery is one of the most studied surgeries for obesity management, has a high safety record and can be a temporary option to manage severe obesity during adolescence,” says Mr Khurana, who is also a Senior Lecturer in the University of Adelaide’s Pediatrics Department.

Lap Band Surgery seems to be an option for morbid obesity amongst adolescents. The critical issue is that pediatricians and health care workers give motivation, support and education to families early on as they see obesity set in for an adolescent. As always lap band is only one option but this study is of interest and worth further investigation.